Location:  Mt Washington, Los Angeles, California
October 2, 2011
We saw the third male California Mantis, Stagmomantis californica, in a week today.  The first was in Claremont California on Monday.  The disoriented creature was on a terrified student’s shirt, but Daniel rescued it and released it in the bushes.  The second was at the Mt Washington Homeowners Alliance at the Carlin G Smith Center in Mt Washington on Tuesday at the board meeting.  The poor confused mantis kept flying into the ceiling fans until it was captured and released outdoors onto a toyon bush.  The third was tonight at our Mt Washington offices, and luckily there was a camera available.  The poor California Mantis was trapped in an Orbweaver’s web, though the spider was not to be seen.  Perhaps it moved to another location or perhaps it fell victim to a predator.  The Mantis was rescued and released and it promptly flew away, but a few minutes later it returned and posed for some photos taken with an electronic on camera flash. 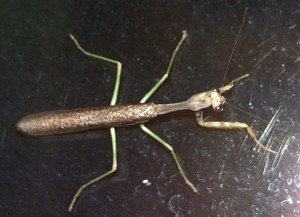 Update:  October 3, 2011
The California Mantis is still resting on the light fixture the next morning. 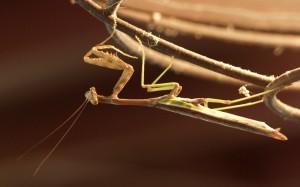