Six Spotted Tiger Beetle: Why are they appearing late in the season???

Metallic green bug
Location: Waterloo, Ontario
August 12, 2011 5:31 pm
Any idea what these are? I saw several of them while walking in the woods on an overcast day. They were 1-2cm long. The bright metallic green colour really made them stand out. It was nice to see more than just mosquitoes!
Signature: Andrew 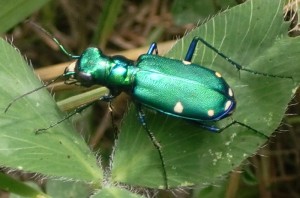 Hi Andrew,
This is a predatory Six Spotted Tiger Beetle, Cicindela sexguttata, and we typically get the most identification requests in the spring, though BugGuide does list sightings as late as September and even October.  Your multiple sightings this late in the season is significant, though we are not exactly certain how to process that information.  Perhaps global climate change is not a myth.  The iris and tomatoes were dismal this year in the garden outside our Southern California office after all,  and the huajes are currently late.

Slug Moth Caterpillar, but which one???

Mantis after being eaten by Wasp

One Response to Six Spotted Tiger Beetle: Why are they appearing late in the season???