black and yellow spider
Location: Harrisburg, Pennsylvania
August 10, 2011 1:25 pm
My husband and I live in Harrisburg Pennsylvania. We found this spider in a pot of plants on our back deck. I think she’s beautiful and have left her alone except to take some pictures. I was content with her presence and still am, but today I went to look at her and noticed that she had molted!! She is now double the size she was before. I had no idea spiders molted and now I’m even more curious about her. Could you identify her for me?
Signature: K. Ryder 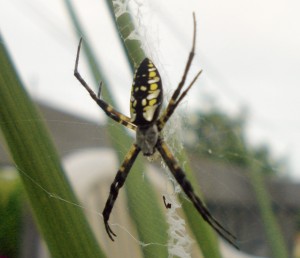 Dear K. Ryder,
The best way to identify a creature is by its scientific name because that cuts across all language barriers.  This lovely spider is Argiope aurantia, and it has numerous common names in English, including Golden Orbweaver, Black and Yellow Orbweaver, and Writing Spider, a name that refers to the zigzag stabilimentum that the spider weaves into its web.  Your individual is a female.  Males are much smaller.  You can see this recent posting for a photo of the diminutive male.  All creatures with exoskeletons, including insects, spiders, scorpions and centipedes, shed their skin and molt to increase their size.  The Golden Orbweaver is not an aggressive species, and the bite is not considered dangerous, however, we imagine if a large female decided to bite a person, it would hurt and be followed by some local swelling.

Who Smashed the Golden Orbweaver???