Ed. Note:  February 21, 2014
It has just come to our attention that this is one of the rarest North American Robber Flies, Dasylechia atrox, and more information can be found on BugGuide.

Carnivorous bumble bee?
Location: Royal Oak, MI
August 2, 2011 2:15 pm
We have a honey bee hive in our yard and have been very bug friendly. We have cicada killing wasps in our driveway and we just steer clear of them instead of filling it with concrete.
Imagine my shock when I was hanging laundry out and saw one of our honey bees having the life drained out of it by what appears to be a bumble bee. Is it?
Signature: Jessica 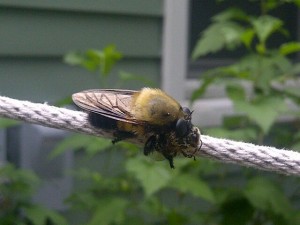 Hi Jessica,
We absolutely love your email, and we would like to wax poetically after we answer your question.  This is a Robber Fly.  It is one of two genera that both feed on large flying insects including bees and wasps that are captured on wing.  Robber Flies are amazing hunters.  They do not sting.  They will not attack you and bite you, but they might bite you if you tried to pick one up, though we could not imagine how you would ever be able to catch one.  We cannot, based on your photo, determine if this is a Bee Killer in the genus Mallophora, or a Bee-Like Robber Fly in the genus Laphria.  One of the ways they can be distinguished from one another is the shape of the antennae.  Your specimen appears to have antennae that end in fine filaments, a sign it is a Mallophora, however, upon enlarging the photo to better examine the details, your photo is not of high enough resolution to maintain image quality.  Your individual does not have markings similar to any of the five species represented on BugGuide, which makes us wonder if it might not be a Laphria, and based on the photos posted to BugGuide, there are several species with markings similar to your individual.  They seem to all have yellow beards, and it is not possible to make out the beard on your Robber Fly, though we are not sure if the black hairs are lost in the shadow or if the tasty Honey Bee meal is obscuring the beard. 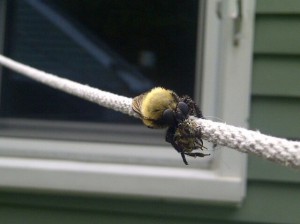 August 3, 2011
Hi again Jessica,
We are positively enthralled by the way you set the tone for your question by providing us with your bug friendly qualifications.  We would like to take additional time to comment on your mention of Cicada Killers.  We have devoted considerable internet real estate on our site toward lobbying for the preservation of Cicada Killers, and when we receive post-mortem images of them, we tag them as unnecessary carnage, but the fact of the matter is that we have never had to share our homes and yards with them.  We really cannot claim to have experienced first hand the communal nesting habits of these large wasps.  We applaud you for your tolerance and also for inquiring about this Robber Fly.  Since we began working on this posting, we have received another unidentifiable image of a large Robber Fly feeding on a Japanese Beetle, and the person who submitted that image wants to know how to encourage more of them.  These large Robber Flies are reported to be able to consume large quantities of Honey Bees, and for that reason, they have a bad reputation among bee keepers.  Thanks again for your wonderful submission.

Thank you so much for the information. We try not to have knee jerk reactions to what we find in the yard and as the cicada killers are nonaggressive unless you happen to be a cicada, there was no reason to destroy their habitat. It’s a short two month inconvenience of my daughters running to the door from the driveway while screaming.
As for the robber flies, they may be a bit of a bother as we are beekeepers. We have already lost one hive to varroa mites a couple of years ago and would rather not lose another one. Now that I think about it, we have spotted a few smaller species of robber flies in our yard. We have never had these insects in our yard before. Do you think the beehive may be attracting them? Is there any way to humanely deter them from eating my bees?

Hi again Jessica,
We have no advice regarding the deterring of Robber Flies.  The smaller Robber Flies are most likely not preying on your bees, and the larger Robber Flies will not enter the hive.  They will attack individual bees that are in flight.  Good Luck.