Killington ”Bluejacket”
Location: Killington, Vermont
August 1, 2011 2:00 pm
What’s this ”bluejacket” (instead of a Yellowjacket)? I’ve seen it twice on Killington Mountain, Killington, Vermont – once 8/16/09 (photo enclosed)& once 7/29/2011. The recent sighting was at about 2500 feet above sea level, on the ”Header” ski trail under the Ramshead Express Quad. This trail faces approximately southeast, I think. The hour was approximately 3 pm EDT, & the area where I saw the insect was fully sunlit & very hot – ~ 80 degrees F. Both times the insect appears to have been feeding on what I think isLiatris Borealis (Northern Blazing Star). Not a great picture, but I hope you can help!
Signature: Peggy Richardson 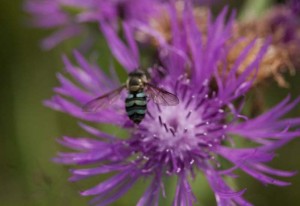 Hi Peggy,
This is a Flower Fly or Hover Fly in the family Syrphidae.  We have tried in the past to identify a blue Flower Fly to no avail.  We will continue to research its species identity.

Update:
We found this newly posted image on BugGuide of Didea alneti from Canada that matches your Flower Fly quite nicely.

Yes, it certainly looks similar.  This is great, thanks.  I’ve been poking around looking for pix & info. & I don’t yet find any other sightings in Vermont.  The link you sent me was reporting from Alberta, Canada.  I found reports from the UK, from Austria/Tyrol, & Sweden. Here’s a Danish site with a great photo gallery of this species:
http://www.fugleognatur.dk/wildaboutdenmark/speciesintro.asp?ID=5338
http://www.globalspecies.org/ntaxa/490251 <- This site lists the distribution as “Alaska to Labrador, s. to Colorado & N.S.” so it’s exciting to think I may be the 1st to report it in VT.  Not surprising that it would be up on a mountain.