Huge green fly
Location: Charlotte, NC
July 31, 2011 8:08 am
This fly/bug was dive bombing our outside light last night. It was hitting the house so hard and loud that I had to go investigate. When I opened the door he barged right in smacking of every object in the kitchen. I am not a big fan of bugs in the house so I started swatting and finally got him. He is large and has a strong body/head to keep running into things. Never seen a fly this big ever. Please help identify. I am very curious to know more about this thing. I live in metro Charlotte, NC. The bug invaded my house around 10pm est. A couple photos show the fly on a standard business card with a ”AAA” battery next to it for size comparison.
Signature: Josh in Charlotte 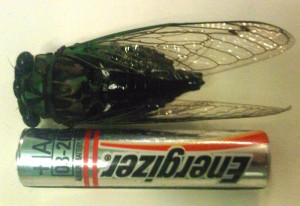 Hi Josh,
Whenever we get an identification request from the Eastern portion of North America, during mid to late summer, and the description includes words like “huge” and “fly”, we can be nearly certain that the request is for the identification of a Cicada.  This is one of the Annual Cicadas in the genus Tibicen.  We formerly informed our readers that Cicadas were perfectly harmless, but since that time, we have received a single report from an individual who very graphically described being bitten on the thumb by a Cicada while it was being handled.  Cicadas have mouths designed to pierce and suck.  They do not normally bite people, but the mouth is capable of piercing human skin.  The bite was reported to be quite painful.  With that said, we still consider Cicadas to be harmless, though the loud buzzing mating call they produce can be so loud as to annoy individual with sensitive ears.  The loudest insect in the world is reported to be an Australian Cicada called the Double Drummer, according to the Australian Fauna website.

One Response to Annual Cicada