jerusalem cricket like bug/spider/scorpion
Location: Central Oregon (Redmond)
July 22, 2011 12:09 am
Hello mr. Bugman,
I am just about as tolerable of bugs as they come but this guy made me jump. It moves very fast and is colored like a jerusalem cricket but has pincer like appendages in the front but without claws. It also has eight additional legs, excluding the pincers. It also has four ”fangs” two on top and bottom. It hasalso two body segments the rear one being longer, about 1/2 an inch. Let me know if you need more info.
Signature: bugboy 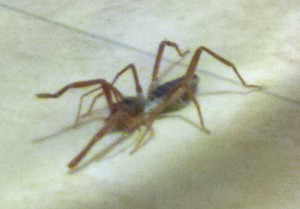 Dear Bugboy,
Your description of a Solifugid is so thorough, we could have identified it without a photo.  Common names for the Solifugid include Sun Spider and Wind Scorpion, and like its arachnid relatives, Solifugids are predators, but unlike those arachnids, Solifugids do not have venom, which is lucky for humans as they are such fierce predators.  Should a Solifugid try to bite a human, it would probably hurt, and possibly even draw blood, however, since they do not have venom, they should be considered harmless despite a frightening appearance.