wasp found burrowing in yard
Location: oklahoma city, ok
June 30, 2011 10:42 pm
My wife and I came home yesterday to find a dime sized hole in the dirt just a foot or so from our front door. A pile of dirt was found maybe 6-8 inches from the hole with a very straight path leading to the pile from the hole. Tonight, as we were opening the front door, I mentioned to my wife that I was curious what insect was burrowing but had not yet seen anything exiting or entering. I assumed it was some sort of beetle. Not 10 seconds after I spoke those words, this wasp-looking insect crawls out! We ran inside and grabbed the insect spray, soaked it 🙂 , collected it, and have been attempting to identify for the last 2 hours. Please help!
Signature: ryan davenport 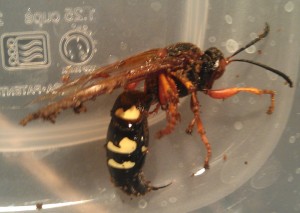 Dear Ryan,
While we understand that fear creates irrational behavior, it is not really necessary to kill things that are unfamiliar to you.  This is a (relatively) harmless female Cicada Killer and she was building an underground nest that she would have provisioned with paralyzed Cicadas to feed her brood.  The reason we stated that she is relatively harmless is that she is not an aggressive wasp and in all the years we have written this column, we have never received a verified report of a person being stung by a Cicada Killer, though that could always be a possibility.  Male Cicada Killers often act aggressively when defending territory, however, though they may dive bomb at you or your pets, they are perfectly harmless as male Cicada Killers lack stingers and they are incapable of doing any damage.