Got woken up with a bite from this guy!! Location: Brampton, Ontario Canada July 1, 2011 11:02 am Hello bugman!! I was trying to get some sleep today and as i rolled over i lept out of bed from something stinging or biting me on the back of my thigh! I felt a pain and as i reached (very quickly) to grab the back of my leg where the pain was i felt there was something there! It was this little guy, he must have been rapped up in my blanket, i just did laundry fresh sheets, douvet cover everything fresh, no mess anywhere but i do live in a basement appartment. The blanket i was using was just off to the side, and i was ontop of my douvet wrapped up in the blanket. So grabbed my leg felt him there, freaked out he crawled outta the blanket, i pushed him on the carpet and dropped a cup on him. scooped him up and took pics, looks like he has a stinger on his bum, i possibley squished him with the ball-point of a pen when looking at him, deffenetly a stinger or something real hard on the bum of him. Anyways theres a gouge out of my leg where he got me, and i think i may h ave scratched the heck out of myself while freaking out! but just wanna know what kind of bug he is and why he was in my bed! Signature: Yours truely…. Exausted but too creeped out to sleep 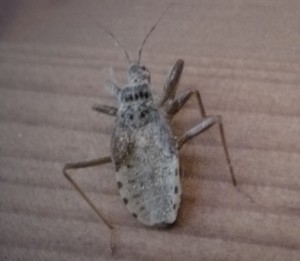 Dear Exhausted …,
This is an immature Assassin Bug, and though some species of Assassin Bugs are blood suckers, there are not many and this is not one of them.  Many Assassin Bugs will bite a human if provoked or carelessly handled, and it would seem that coming into contact with you between the sheets could constitute careless handling.  We believe this is an immature Masked Hunter, Reduvius personatus, and the species gets its common name because the sticky surface of the insect attracts all manner of dust which effectively camouflages it in its surroundings, masking it from detection.  Your individual might be newly molted as it does not appear to have any dust or debris attached to it.  It does match this individual on BugGuide.  Masked Hunters are known to hunt Bed Bugs, so they should be considered as beneficial insects. 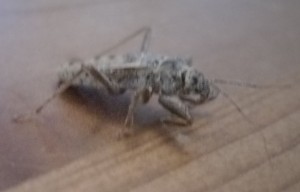