What is this!?
Location: Chichester, England
May 30, 2011 6:10 am
Hi, I am writing to you from Chichester, England. I was out last night and spotted this on the high street, do you know what it is!?
Signature: Thanks, Gordon Frew 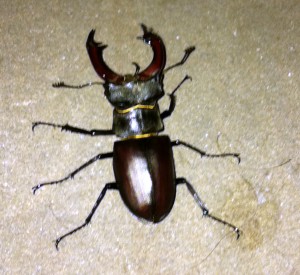 Hi Gordon,
This magnificent beetle is a Male Stag Beetle, Lucanus cervus.  According to the Natural England website:  “This species is now rare and declining in Europe.”  The website also provides this tip:  “In a recent survey of the species, 70% of sightings came from domestic gardens. You can provide a habitat for stag beetles and other dead wood insects by making a pile of logs, ideally with bark on them, placed upright in partial shade and sunk partially into the ground, with plants growing over them to retain humidity they need.”  The UK Safari website has nice information and photos on the life cycle of the Stag Beetle including these special features:  “This is the largest beetle found in Britain, and now sadly, quite rare.  The most noticeable feature of the male are the large antler-like jaws, which give the beetle its name.  They are used during the mating season to fight with other males over territory. Each male tries to grab his opponent between his jaws, and then throw him.  The fully grown male stag beetles can normally be seen flying at dusk between May and August. The warmer temperatures at this time of year encourage them to look for a mate. They will drink tree sap, but do not eat, and will not grow at all. After mating the stag beetle dies.”  You may also be interested in this article on attracting Stag Beetles with ginger from the BBC website.

2 Responses to Stag Beetle from England