Giant moth identification
Location: Gauteng, South Africa
February 24, 2011 3:14 am
We often get these guys fluttering about at night, this is the first pic I’ve gotten of one of them sitting still in good light.
The wingspan is usually about 10cm (4 inches)
Signature: twistedlizzard 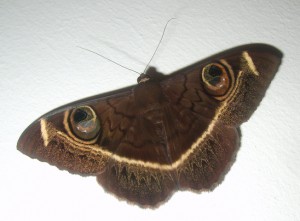 Dear twistedlizzard,
You have some species of Owlet Moth.  There are many Australian species that are also found in South Africa and some genera are represented by similar looking species in the two locations.  We believe your moth looks like either a member of the genus Erebus which you can find represented on Butterfly House, or the genus Donuca which you may see on the Brisbane Insect website.

This looks like a Cream-striped Owl, Cyligramma latona (Noctuidae: Catocalinae). It is apparently widespread and common in Subsaharan Africa, as well as Egypt, and the larvae feed on Acacia. Regards. Karl.