Clearwing Butterfly from Guyana is Cithaerias andromeda Katydid from Peru

Mediterranean Fruit Fly in Mt Washington: but is it eating the Olives???

fruitflys
Location:  Mt Washington, Los Angeles, California
February 9, 2011
Hi Daniel,
This year I finally had my olive produce olives, however ever single olive was infested with maggots or worms.  I saw a couple of these around, and I finally was able to catch one yesterday.  I think this may be the same problem i have had w/ my Quince for years.  I spray organic stuf, but it doesn’t seem to work, and I treally want to keep organic.  I was wondering if this is the med fly or the med olive fly?  So I scanned he hell out of it.  Any suggestions Obi won?
thanks-rourk 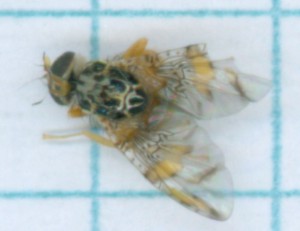 Hi Rourk,
We thought we might be able to post a photo of the Olive Fruit Fly thanks to your email, but alas, the images of the Olive Fruit Fly, Bactrocera oleae, that are posted on BugGuide do not match your particular Fruit Fly.  According to BugGuide:  “Introduced from the Mediterranean region to California; recorded first time in Los Angeles in October 1998. So far it is restricted to California, where it is considered a serious pest.  It is hoped that a recent (2008) introduction of a hymenopteran parasitoid, Psyttalia cf. concolor will control this pest.”  We would deduce that you probably do have an infestation of Olive Fruit Flies ruining your crop, however, the Fruit Fly in your photo might be feasting on another of the exotic and rare fruits you have growing in your Mt Washington garden.  Your specimen appears to be a Mediterranean Fruit Fly or Med Fly (see BugGuide) and it is ironic that it has appeared at the start of Governor Jerry Brown’s third term in office since he was governor during the infamous Med Fly eradication of the 1980s.  According to BugGuide:  “larvae feed and develop on many deciduous, subtropical, and tropical fruits (citrus, peach, pear, apple) and some vegetables, sometimes tunneling through the pulp and eventually reducing it to a juicy inedible mass” and “One of the world’s most destructive fruit pests, and the most economically important fruit fly species. When it has been detected in Florida and California, especially in recent years, each infestation necessitated intensive and massive eradication and detection procedures so that the pest did not become established. [U. of Florida]  In California, a state government program releases large numbers of sterile males, which are a not-uncommon sight in some places. A female (they have a visible ovipositor on the rear tip of the abdomen) would be a sign of an infestation, and should be reported immediately.”  Given the variety of fruits that may be eaten by the Med Fly Maggots, we would not rule out that the Med Fly has been ruining your olives.

what a cool nice post,I’ll call the ag dept. again, thanks Daniel, and my spelling is sooooo bad.  thanks-Rourk