Jessica’s Pet Caterpillar
On Jan 24, 2011, at 6:07 PM
Location:  Rwanda
“puffy hews”. what kind of beastie will emerge from this rwandan living cactus??
julian thinks he’s a type of moth – a wild silk moth – a saturnidae.
Clare 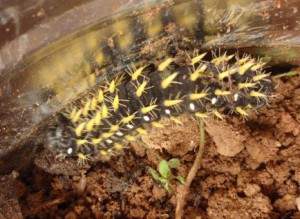 Hi Clare,
I agree with Julian that this is a Giant Silkmoth Caterpillar, family Saturniidae (you dropped an i and failed to capitalize the family name).  I have been unable to match it to any Rwandan species on the World’s Largest Saturniidae Site, so I have contacted Bill Oehlke who oversees that website to see if he is able to provide any information.

Bill Oehlke responds
Daniel,
I am pretty sure it is one of the Imbrasia species. That genus has been divided into Imbrasia and Gonimbrasia, and Gonimbrasia genus has been further divided into Gonimbrasia and Nudaurelia subgenera.
I think in the next few years there will be a few more genera/subgenera added. Currently, I would say it is Gonimbrasia (Nudaurelia) dione, but I have been advised there are probably many new species that will be described in the next little while as a result of DNA barcoding.
Dione has an all black larvae with yellow spinage and white spiracular ovals, and it likely flies in Rwanda. I have never seen a published list of Saturniidae species found in Rwanda.
The list I have composed is largely based on interpolations from lists sent to me by Thierry Bouyer for other African countries and from internet publishing of specimens for sale. I think Thierry’s information is quite reliable, although subject to the upcoming revisions based on DNA barcoding; the other sources would be less reliable.
There currently is nothing more reliable in print or on the internet, at least not so far as I have seen.
Is it possible she can provide a larger image?

Ed. Note:
We are inquiring about a larger image.  Meanwhile, we did locate links to the adult moth on Thorne’s Insects Shoppe and on FlickR where it is also represented on the Moths Tanzania page.  There are also photos of the adult moth on an African Moths website we located.

Hi Daniel,
List of foodplants on Gonimbrasia (Nudaurelia) dione file.
If she still has it in Rwanda, use natural hosts. If it is now in US, use US host.
This species does not make a cocoon, but would pupate in a tub between paper towels if treated as per north america earth pupators like regalis.
I would love to see moth if she is successful. 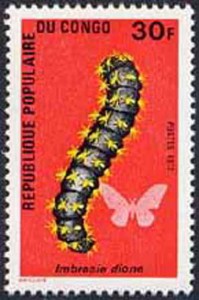 great info. a famous caterpillar!
of course, several skin allergy producing food species listed…
jessie – get out the paper towels for puffy hews to pupate – i do hope he is still alive…
i love that it eats ricinus… let’s get some for elyria!
oh, but it eats sumac, too. not so useful!
is mr. oehlke an entomologist?
clare