Grain Weevils What Came in on the Christmas Tree? Giant Conifer Aphids

This was in my pool
Location: Perth, Western Australia, Southern Hemisphere, South Pacific, My swimming pool.
January 3, 2011 2:04 am
Hi, My name is Seb from Perth, Western australia.
It’s very hot here at the moment.
The photo posted is the second one of these I’ve seen in the space of a fortnight.
On the first encounter I was working on my bike in the shed and one of these was more or less trying to attack me?
I can confirm it can fly.
Anyway my dad took it away to the swamps later that night for his walk.
The second one was in my pool pretty much drowning so I rescued it with our brush.
I noticed it was not only trying to attach itself to the brush, but it was biting at the bristles!
Anyways I couldnt completely get it out with the brush so I scooped it up with the container, hence the water.
I was abit afraid of putting my hand any closer for a better photo… lol.
After taking the photo, it was released to the front garden. God forbit its actually an invasive species not indigenous to this region.
Im guessing because of its rear spines, its part of the cricket family?
We have a relatively large veggie patch wich at night time seems to come alive. We can hear 2 or 3 different types of frogs etc which I think should be part of a healthy ecosystem? Also lots of various plants planted around the walkways etc.
I do hope someone can help to identify this.
Kindly thanking you in great anticipation.
Signature: Thanks, Seb 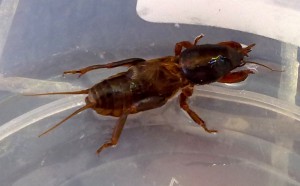 Hi Seb,
This is a Mole Cricket and they do fly.  They are subterranean insects that for some reason, perhaps the pool lights, are frequently found in swimming pools.  Mole Crickets, which resemble one another even when the are different species, are found worldwide.  The Brisbane Insect website has a lengthy page on the Mole Cricket.