Think they came in with the Christmas Tree!
Location: VIRGINIA
December 29, 2010 7:28 pm
Dear Bugman,
We had a live Christmas tree in our house for about three weeks before I noticed a single one of these bugs. Then all of a sudden, one day I saw them all over the floor surrounding the tree. I kept finding more and more spreading out from around the tree into other rooms. FInally we saw they were all over the trunk and branches of the tree. I can’t seem to identify what they are from looking at any pictures of bugs commonly found on Christmas trees.
They are very small and almost look like woodticks except they have only six legs.
What are these little guys and how can I avoid bringing in bugs on the Christmas tree in the future?
Thank you!
Signature: Hoping they’re benign 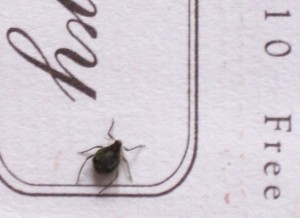 Dear Hoping,
This is a Giant Conifer Aphid in the genus Cinara.  BugGuide notes that “They are, however, a problem for Christmas tree growers: customers don’t like large, conspicuous aphids in their homes, especially since they tend to abandon the tree as it starts to dry out.“ Benign is not really a word we would use to describe Aphids.  BugGuide has this to say about members of the genus Cinara:  “Tends to form colonies on individual trees. They secrete honeydew, which is eaten by ants and wasps and provides the substrate for sooty mold fungus. May cause some stunting or even death on small or already-stressed hosts, but generally not a serious threat.”  Any threat they might have posed to the tree upon which they had been feeding is irrelevant because the tree died when it was cut.  Other than being a nuisance in your home, they Giant Conifer Aphids that fled your Christmas tree as it began to dry out will not cause any further damage, unless there is a potential host tree living nearby that they can infest.