Poor Shelob
Location: Knoxville, TN
November 25, 2010 8:24 pm
So the other night I was halfway into a nice dream about a college grant when I heard my younger tweenaged sister screaming bloody murder in her room. I dashed into her room to find her cowering in the corner and shaking one of her crutches (she’d broken her leg the preivious thursday,) at the blinds. After dashing back to my room to get my glasses (I’m VERY nearsighed,) I got to behold THIS huge bugger. I got her camera from her dresser and this is the only shot I got of him. I told Emmers not to swat at it, being an avid spider lover (I own a very sweet rosy-toed tarantula, whom I love dearly and whom my sister wishes to coat with Raid,) and I rushed to Google the big boi. I got about three minutes to search before I heard a screech and several thwacking sounds coming from Emily’s room; the spider had apparantally made a dash for the closet after Emily had tossed a shoe at it. When I arrived, I found the poor arachnid squished into paper form. I gave him a tiny burial beside my Aloe plant and gave him a little cardboard headstone, which I marked ”Shelob”, before going back to bed. I then found this website and decided to ask what kind of spider he is. I’m assuming it’s some kind of wolf spider. As much as I like spiders, I’m not too familiar with the different spieces.
Signature: Lexie Bee 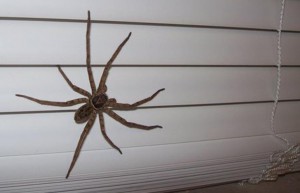 Dear Lexie,
We believe you encountered an introduced Huntsman Spider, Heteropoda venatoria, though BugGuide only reports it from the extreme southern states of Florida, Georgia, Louisiana and Texas.  This spider, which is believed to have spread to many warm port cities around the world because of stowing away on banana shipments, has even been reported in northern climates before the quality control on banana shipments was improved.  You can compare your image to this one on BugGuide or this one on a forum.