beetle found in costa rica
Location: Costa Rica
November 21, 2010 4:53 pm
Hello,
these beetles were seen in Costa Rica but we have been unable to identify them.
Pleeeeeese help as it is driving us mad.
Signature: Mrs G Dyer 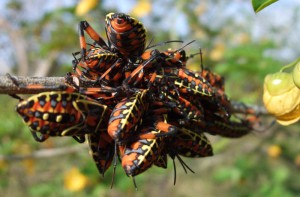 Dear Mrs G Dyer,
These are not beetles, but rather, immature Leaf Footed Bugs in the genus Thasus.  The Giant Mesquite Bug, Thasus neocalifornicus, that is found in the Southwest portion of North America is very similar.  We posted a similar photo from Mexico recently, and that posting has much information.  According to BugGuide:  “Dr. James Hogue (Cal State Northridge) pointed out that this genus has been revised (please see references below; HW). T. acutangulus is present only in Mexico, Guatemala, Belize (formerly British Honduras), and Costa Rica. The records from the United States are misidentifications (per Brailovsky, Schaefer, et al. 1994; see reference below – HW)   T. neocalifornicus is the only species of this genus that occurs in the U.S.A.  It is close to T. gigas from Mexico, and T. acutangulus (see distribution notes above).”