Scudderia Furcata Katydid female
Location: Vancouver, Washington
November 21, 2010 12:05 am
I recently sent a letter to you asking the specific species of a little Katydid from the northwestern U.S about a week ago, probably on veterans day.
Well, I researched a little for myself and figured she was a scudderia furcata, as she matches that most.
The little gal is a veteran herself; having lost her two rearmost legs. I found her outside on my porch, and she didn’t fuss at all when I caught her in a little container.
Now she’s in a little terrarium, filled with moss, sticks, and an abundant amount of food. She seems happy enough without her legs; but one inquiry I haven’t been able to find the answer to is whether or not her legs will grow back.
I’m attaching as many of the good photos I have of her as I can. I hope you will publish this, and fast, because it’s not a research piece. I’m also hoping that she’ll lay eggs every time her ovipositor shifts down to let her poo, but then again that’s just a hope. 🙂
By the way; I’ve named her Kekoa. A friend told me it means ’Little Brave One’.
Signature: Sincerely, Kaetlin the bug fanatic 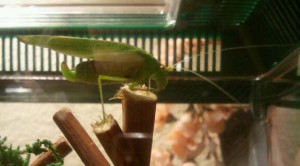 Hi Kaetlin,
We believe your identification of a Fork-Tailed Bush Katydid is correct, though we would not entirely discount another member is the genus as several other species may be found in your area according to BugGuide’s data.  Kekoa’s legs will not grow back.  Leg regeneration is unusual in insects, though some spiders are able to regenerate missing limbs if they are young.  The new limb will grow with each new molt.  As an adult, Kekoa will not molt again, so her legs will not regenerate. 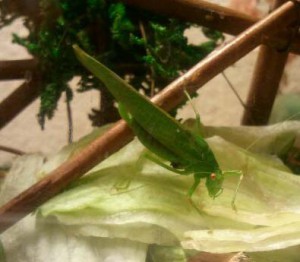