complete life cycle of two tailed swallowtail
November 21, 2010
Location:  dirt road 4 miles north of nederland colorado in western boulder county
hi daniel,
here are the photo’s i was telling you about of the complete life cycle of two tailed swallowtails. i have to send them in two emails as i am not able to send all 14 photo’s in one email.
the first seven photo’s begin with a picture of the female two tail laying her eggs on a choke cherry bush. 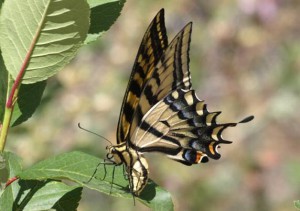 it was aug. 9, 2009. we were on a dirt road 4 miles north of nederland colorado in western boulder county. i had never seen a two tail at this elevation (about 8,500 feet). i found 5 eggs and brought them home to raise. i had never raised butterflies before so the whole process was new to me. and i quickly found out that two tails have a very long process to complete their life cycle. 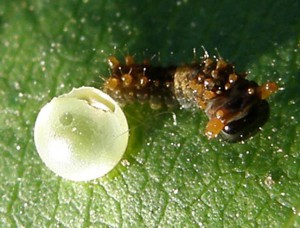 the 2nd photo is of a hatchling. it is greatly enlarged. the eggs are the size of a pin head and the caterpillar (larvae)is the size of a comma. this is the first instar. the date of the first hatchling was aug. 21st. 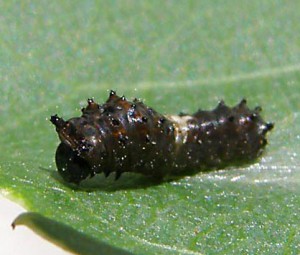 seven days later (3rd photo) one molted to the 2nd instar.  now they look like bird poop as a protective measure. they didn’t all molt on the same day. 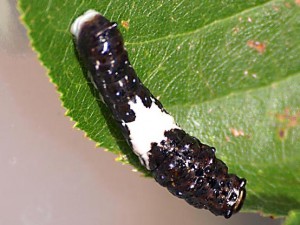 two weeks after that they molted to the 3rd instar  (4th photo). they still look similar but are getting bigger all the time and eating more. 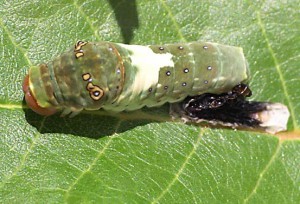 about a week later (5th photo)they started molting again and the photo shows one crawling away from his skin. this is the 4th instar and he looks like green velvet. there are several stages to the 4th instar. 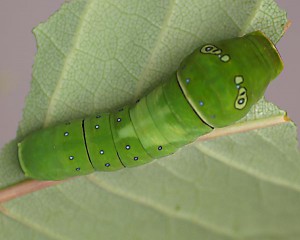 the first is the green velvet look then they become brighter green and the white bird shaped marking on their backs still shows (6th photo) and then the white marking disappears (7th photo). they are getting bigger and bigger and eating LOTS!
i will continue this in the 2nd email  with the remaining photo’s.  thanks, venice 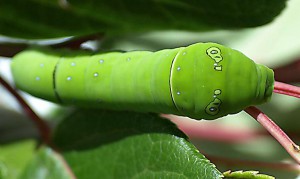 Dear Venice,
Thanks so much for sending this awesome documentation.  We don’t mean to disagree with you, but caterpillars have five instars.  We believe the final image in the first half of this series is actually the final or Fifth Instar.  When the caterpillar is getting ready to form a chrysalis, it often changes colors, which is where the second half of your series picks up.  Dear Readers, Don’t forget to read Part 2 of the Life Cycle of a Two Tailed Swallowtail.

Life Cycle of the Anise Swallowtail

UPDATED: Metamorphosis of the Common Mormon