Walking stick from Eastern Washington
Location: Yakima, WA
November 2, 2010 11:17 am
I was surprised to find a couple of these Phasmatodeans in Eastern Washington. Do you think they live in sagebrush or the shrub elm I found them near. If they hadn’t been blow onto the pavement, there would be no hope of finding them. Real short antennae.
http://www.facebook.com/album.php?aid=293596&id=748938972&l=6a428cfa4a
Signature: Paul Huffman, President-for-Life, Moclips Surf Club 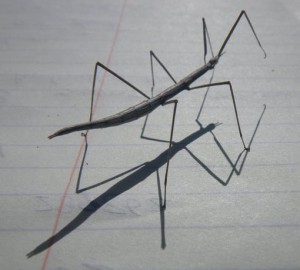 Correction
Once Paul wrote a comment on the length of the antennae, we realized that this must be a Western Shorthorned Walkingstick, Parabacillus hesperus, which is illustrated on BugGuide, though its range is listed as California and Oregon, and not as far North as Washington.

One Response to Western Shorthorned Walkingstick