Unidentified Moth in Virginia
Location: Craig County, Virginia
November 2, 2010 1:27 pm
I found this moth sitting on a branch while hiking in Craig County, VA. I took this picture of it on a 70-degree late October day. When we approached the moth, it spread its wings out and revealed its ”furry” abdomen, which had black and reddish-orange horizontal stripes. It was approximately one inch in length. I thought it might be some type of tiger moth, however could not find any images that matched it. I hope you are able to help with the identification!
Signature: Jessie 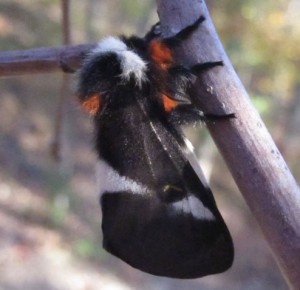 Hi Jessie,
You have submitted a Buck Moth, Hemileuca maia, a species that, according to BugGuide, is “Said to fly rapidly at mid-day through oak forests.”  The adults are seasonal, and tend to fly in October and November, though in the north, they are found in September, and in the extreme south they may be found as late as December.  The flight of the adults coincides with deer hunting season, and the common name probably has its origin with buck hunters seeing the moths in the oak forests while hunting.  Adults do not feed, and they have a very short life.  They die soon after mating and reproducing.