Garage Dweller
Location:  Milwaukee, WI
October 18, 2010 9:46 am
This guy lives in my garage. Hasn’t moved in 4 days and is my first time seeing it so, I know it’s not dead or anything. Any idea what kind of spider this is? Looking online, it may be an Orb Weaver but the markings on the back don’t match. Need to know if this is dangerous please. Thanks much!
Signature:  Robert 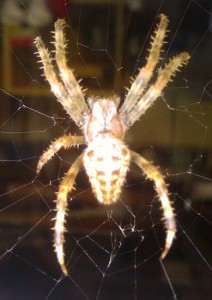 Hi Robert,
At first, we supplied you with a short responses acknowledging that this was a harmless Orbweaver, but as we pondered which letters to use for longer responses and postings, we selected your image and letter despite the blurriness of the image because there is something puzzling about your image and because the back story on the species is so interesting.  We believe your spider is a Cross Spider, Araneus diadematus, a species that was introduced to North America from Europe and that is now well established in the northeastern quadrant of North America as well as the Pacific coast states.  The interesting thing about your image is that the spider is not up-side-down in the web, which is the typical position.  The fascinating back story has to do with the most famous Cross Spiders, Anita and Arabella, who were shot into space aboard Skylab 3 as part of a NASA outreach program that answered student questions.  Anita and Arabella did weave webs in space, though the web weaving process was altered by weightlessness.  Sadly, both Anita and Arabella died before splashdown, but their bodies are in the Smithsonian Institution.  Daniel really wanted to see them on his last visit to Washington DC, but time did not permit.  You can read more about Anita and Arabella on About.Com and you can read more about Cross Spiders on the University of Michigan Animal Diversity website.  Spiders of many types, especially Orbweavers become more visible in the autumn as they mature and continue to spin larger webs.  Orbweavers are harmless, though many species are large, colorful and frightening.  Perhaps one of our readers will be able to contribute additional information regarding the unusual upright position your individual has taken in the web.

Update from Trevor:  Image was inverted
Hi guys, I think the comment that the picture is inverted is correct. Note the deformation in the web at the back legs. When rotated you can see that the spiders weight is pulling on the strands, I have cleaned up the pic and rotated it. It appears then that there is a row of cupboards in the background with objects sitting on the bench top.
Signature:  aussietrev 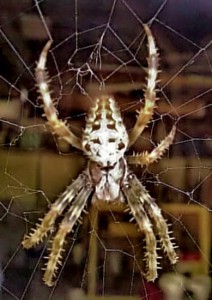