Unnecessary Carnage: Leaffooted Bug Dispatched with a 2 half cans of Insecticide!!!

Flying Insect with Chubby Ankles
Location:  Richmond, Virginia
October 16, 2010 10:57 pm
This thing is about the size of a stinkbug, but it has what look like fleshy pouches on its two hind legs. It has a proboscis, and I don’t know what it eats.
It has wings and flies, but seems very resistant to Raid: Flying Insect Killer, and Raid: Ant & Roach Killer. I finally brought this thing down with about half a can of each. It didn’t die quickly, and twitched for about 15 minutes as I was drowning it in the spray.
I have nuked all entrances to my house with poison, yet these things seem to be the only things that still get in. Even spraying them directly doesn’t kill them quickly at all.
I’ve never seen them before I moved here, but have seen half a dozen of these things since I moved here about 2 months ago.
Please help!
Signature:  Raid Can’t Help Me 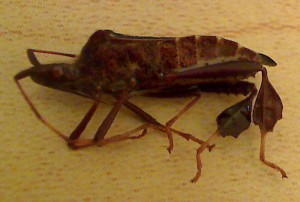 Leaffooted Bug: Dead after spraying with 2 half cans of insecticide!!!!!!!

Dear RCHM,
Rarely have we been so entirely horrified with a posting that we tag as Unnecessary Carnage.  Generally, we lament the dispatching of a single beneficial or benign creature that has been swatted or stomped, but your letter has taken the term Unnecessary Carnage to an entirely new level.  In your obsession to prevent a benign creature from entering your home, you have exposed yourself, your family, your pets, and the environment to poisons with potentially long term side affects that might not be fully understood.  We can’t help but to be reminded of the publicity stunt pulled by B.T. Collins during the aerial spraying of malathion in California in the early 1980s in a feebly unsuccessful attempt to control the spread of the Mediterranean Fruit Fly.  According to Time Magazine Online:  “B.T. Collins, 40, director of the California Conservation Corps, gave the most dramatic demonstration of its safety: he drank a glassful of Malathion diluted with water to the concentration used in the spray.“ Malathion spraying failed to control the Mediterranean Fruit Fly, AKA The Med Fly, in the 1980s and your senseless spraying of insecticides will fail to keep insects from entering your home.  Please take the time to educate yourself about the wonderful natural world around you and to learn about the harmful effects of introducing unnecessary chemicals to the environment.  Your insect is a Leaf Footed Bug in the genus Leptoglossus, possibly the Western Conifer Seed Bug.  These harmless creatures often enter homes as the weather begins to cool so that they can hibernate during the cold winter months.  They will not harm you, your pets, your home or its furnishings.  If you find their presence offensive, simply remove them and please desist with the excessive use of poisons.

Daniel,
I must apologize for my actions that I now realize were unnecessary against the harmless Leaf-Footed Bugs that have gotten inside my house over the last few months. I was scared that they would be dangerous given their size and appearance, but now that I know what they are, I won’t be afraid of them any more. Because of the information you’ve given me, I won’t kill them any longer when I find them, I’ll simply brush them back outside.
Thank you!

You’re welcome.  In the interest of education, the indiscriminate use of pesticides might be very harmful to sensitive individuals as well as the environment.

Western Conifer Seed Bug killed because of a distant relative

Unknown True Bug from South Africa is a Spiny Bug

2 Responses to Unnecessary Carnage: Leaffooted Bug Dispatched with a 2 half cans of Insecticide!!!