on hickory tree
Location:  northern mid TN
September 26, 2010 7:06 pm
We were cutting up a downed Hickory here in mid Tn and these bugs were a little territorial of their section of wood. They seemed to be male and female sticking the long tail end into holes in the wood. They were overall around 5-7 inches long.
Signature:  Tom 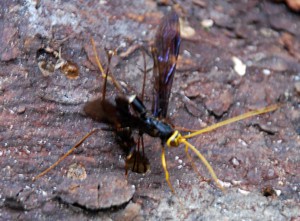 One Response to Giant Ichneumon Ovipositing