queen wasp?
Location:  Mansfield, Ohio USA
September 19, 2010 9:48 pm
Found this ”big lady” laying eggs I believe in a log in my backyard (Mansfield, Ohio) Any idea what type of wasp, I assume wasp. Pictures I know aren’t fabulous, though I do have great video. The appendage on the backend she used to deposit her eggs was 6 inches long when fully put out. Was very cool to watch.
Signature:  chris 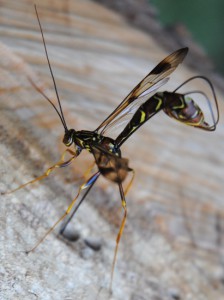 Dear Chris,
Theoretically, a Queen Wasp is a reproductive female that creates a nest or colony that consists of workers.  Solitary Wasps are not considered queens.  Your individual is a Giant Ichneumon, a Parasitoid species that deposits her eggs in wood that has been infested with wood boring larvae a Wood Wasp known as the Pigeon Horntail.  Your Giant Ichneumon does not form a nest or colony, so she is not a queen.  There are several species known as Giant Ichneumons, and it appears that your individual may be Megarhyssa macrurus.  You can see other examples in our archives as well as on BugGuide.  Though it might seem that the Giant Ichneumon could sting a person, her ovipositor is not multi-purpose, and she is incapable of stinging. 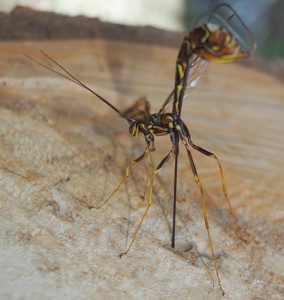