The Curious World of Bugs: Our advance copy arrived in the mail today … Male Imperial Moth

what is this?
Location:  Aberdeen, United Kingdom
September 15, 2010 8:57 am
hi there, found this bug on the ground in aberdeen, uk. found outside a university. can you help identify it?
Signature:  Lewis 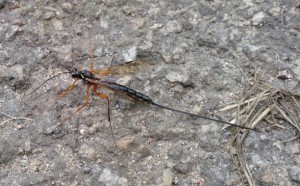 Dear Louis,
This is an Ichneumon, a Parasitic Hymenopteran that is classified with bees and wasps.  In North America, similar looking Giant Ichneumons in the genus Megarhyssa prey upon the Pigeon Horntail, a species of Wood Wasp whose larvae are found feeding on dead or dying wood.  The female Ichneumon, and your specimen is a female, can be identified by her long stingerlike ovipositor which she uses to deposit her eggs in wood that is infested with the larvae of the Pigeon Horntail.  Our hypothesis is that the UK specimen you have photographed may have a similar Wood Wasp host in Europe, but without successfully identifying the species of your Ichneumon, we cannot be certain.  We found a BBC Science and Nature page that indicates that Rhyssa persuasoria, commonly called a Sabre Wasp, is the largest Ichneumon “fly” in Britain, and it is described as:  “Giant ichneumons have slender bodies, with a wasp waist, and long, flexible antennae. The apparently fearsome-looking sting at the end of the female wasp’s abdomen is actually an ovipositor (egg-laying instrument). This is protected within a sheath. This species has a black body with pale yellow/white markings on the abdominal segments. The legs are orange.”  Alas, there is no image, but the written description appears to fit your photograph.  Before leaving the BBC Science and Nature Page, we decided that the behavior description also needed to be included here:  “Ichneumons are parasites that lay their eggs in or on the larvae of other insects or spiders. The hosts of giant ichneumons are usually the larvae of horntails, or wood wasps (Orocerus gigas), and related species, as well as the larvae of longhorn beetles (Monochamus sutor). The female looks for hosts, which live within fallen timber. She may detect them through the smell of their droppings, which are then contaminated by fungi, or by sensing their vibrations within the wood. However she does it, the accuracy with which she locates them is remarkable. When she finds the right spot, she drives her slender ovipositor into the wood (which can be inches thick) by rotating the two halves backwards and forwards very rapidly. She lays one egg next to or on the host larvae. The whole process takes about 20-40 minutes. When the fly larvae hatches it feeds externally on the host. It overwinters and pupates in the spring before emerging from the wood. Giant ichneumons sometimes emerge in houses from furniture made from new timber. The adults are active from July-August.”  We found an image of a female depositing her eggs on the Insect Images website, and there is a strong resemblance to your specimen.  The Offwell Woodland & Wildlife Trust website has a nice photo and description.  Though the markings on your individual are not as pronounced, we are confident it is at least in the genus Rhyssa.