yarg!
Location:  West Texas (Midland)
September 10, 2010 1:15 pm
This bug looks kinda like a springtail, but it’s huge! I live in West Texas, it’s summer time, (September), and it has rained a little bit lately. One got in the house last night. The dog goes out and sits down on the back porch and they stick to his fur.
I only see them at night, and when we’ve turned off the porch light for a while, they go away.
they have long antennae, and are kinda striped.
Signature:  grossed out 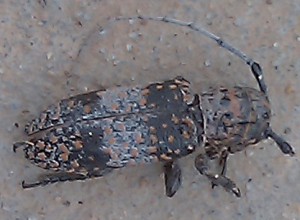 Dear grossed out,
Your beetle is a Mesquite Girdler, Oncideres rhodosticta, one of the Longhorned Borer Beetles in the family Cerambycidae.  Your observation that they are attracted to lights is valuable information that is not included on BugGuide, though many other members in the family Cerambycidae, like countless other beetles, moths and other insects, are attracted to lights.