Unknown Mating Beetles
Location:  Texas Hill Country
September 7, 2010 4:01 am
Hi there!
We found these guys in our backyard, there’s actually a lot of them. Over the last couple of years they have made more of an appearance then before. I think they like the oak trees in our yard. During the morning they fly around the trees, and by mid-afternoon there buzzing around at head level. I’ve tried identifying them with your catalog, but the only beetles I’ve found are similar are the Japanese Beetles, and these are lacking the dots along they’re sides, aside from not being quite the same color. Thank you for you’re lovely site, it provides endless education for my children and myself.
Signature:  Beetle GURL 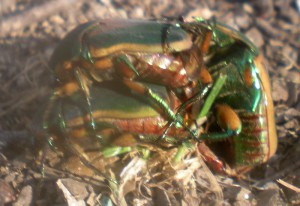 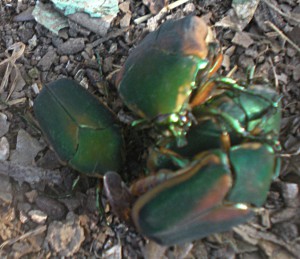