September 3, 2010 @ 1:04 AM
A male Green Lynx Spider, my favorite Los Angeles spider, was hunting a male Katydid while his ladyKaty watched on horrified from the door jamb.  I tried to save the Katydid and removed him and his mate jumped away.  Too late I thought I might have caught them and refrigerated them, perhaps allowing them to warm up and eat every few days in a feeble attempt to keep them alive for live television.  {They all want bugs.  I don’t travel with bugs he thought as he suddenly remembered the dead Fig Eater he had picked up on the sidewalk on the way for Armenian food.}  By the time I got the idea to photograph them, the LadyKaty was gone.  By the time I thought to capture them and chill them, both Katydids were gone.  I could always capture and chill that trophy Green Lynx, but I can’t bear to remove him from my yard.  I know he will have lots of spiderlings. 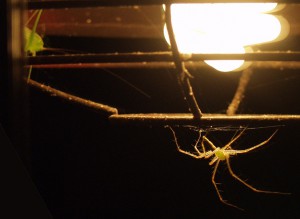 Green Lynx fails to notice the Katydid behind it

Though moments earlier the spider had been stalking the Orthopteran. 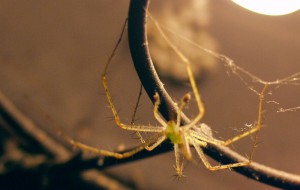 In our garden, the female Green Lynx Spiders are usually found on foliage.  This beautiful male was a bit out of focus in the previously posted image, so we found a sharper one where his pedipalps really show.  We hope he stays on the porch light.  We are going to talk to Julian Donahue about refrigerating insects to see how long we can keep specimens in the refrigerator before our tentative October interview on local news. 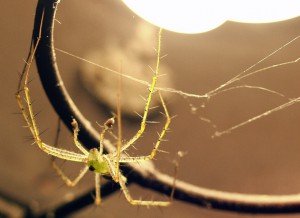