Possibly an encounter with a Hellgrammite

Centipede-like bug with pincers?
Location:  Utah
September 2, 2010 1:26 am
I have been searching long and hard for a site where I could ask about a bug I found, so here goes!
Unfortunately I don’t have a picture (but I drew it? haha) of it since I was too frightened to catch it and I didnt have my camera with me at the time.
It was also very dark when I found it and I was in a river… I was swimming around, looking for tadpoles and frogs. And then much to my horror I shined my flashlight upon something that was definitely neither of those.
I can’t remember exactly what it looked like but it had a very long centipede-like body with a lot of legs like one. I think it was white and black (but it was nighttime, and I wasn’t really paying attention to its color for obvious reasons) and it was coming out from under a rock. So it obviously lives in the water. And it had very sharp needle-like pincers that curved in and looked like it could chop your finger off if it got close enough.
I’ve looked everywhere for one. All over the internet, and I can’t seem to find anything that looks even remotely close to it. I really wish I had taken a picture of it! Does something like this exist? Or is it some freak science-experiment gone wrong?
I’m sorry, I wish I had a better explanation of what it looked like (and a better drawing!). The next day I went back hoping to catch it but I didn’t see it anywhere. Of course it only shows up when it isn’t wanted.
Signature:  Maddie 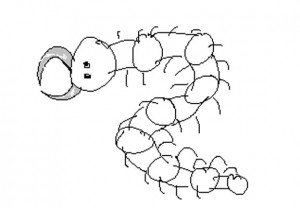 Hi Maddie,
We were quite certain based on your drawing and your letter that you had an encounter with a Hellgrammite, the aquatic larva of a Dobsonfly, but we began to question that theory when we realized your sighting was in Utah.  The commonly encountered Eastern Dobsonfly does not range to Utah, but there are three other species that occur in western states.  According to BugGuide:
“The only eastern species is Eastern Dobsonfly, Corydalus cornutus. Three other species apparently have very limited distribution in North America:
Corydalus luteus – South Texas
Corydalus texana – SW US west of the Rocky Mountains
Corydalus bidenticulatus – Arizona
Genus is restricted to the New World–other species in Central and South America.”
We were unable to locate an image of a Western Dobsonfly, Corydalus texana, but a web search did lead us to a trout fishing page with a photograph of a Dobsonfly and a nice description.  The God of Insects website also has some information.  We are posting your letter with an image of the Hellgrammite of an Eastern Dobsonfly as we imagine the western counterpart must look very similar. 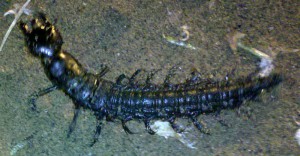 Interestingly, we did notice that one of our earlier postings is from Colorado, which would indicate there is a strong possibility that image is of Corydalus texana.

15 Responses to Possibly an encounter with a Hellgrammite