Very large wasp with orange band
Location:  Fairfield, Maine USA
August 27, 2010 11:02 pm
Dear Bugman,
I was in the Goldenrod today and was passed by an enormous wasp. It looked a lot like the Blue Mud Wasp but it had a bright orange band around it near it’s end. It was probably over 3 inches long, but I could not get very close to it before it flew away. What is this thing? Can they sting?
Thanks,
James R 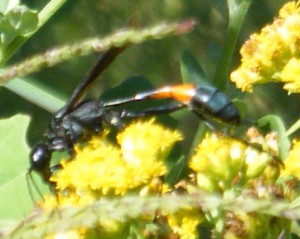 Hi again James,
You really are amassing up quite a collection of images of your local insects on our site.  This Thread Waisted Wasp, Ammophila nigrans, is feeding on goldenrod, as are several of the insects you submitted last week.  We really are interested in certain habitats, like the Milkweed Meadow tag we just created, and the Goldenrod Field is another excellent place to observe a variety of invertebrates that are either attracted to the nectar or the creatures feeding on the nectar.  According to a comment Eric Eaton posted to BugGuide on Ammophila nigrans:  “As adults, they feed on nectar. The larva feeds on caterpillars, paralyzed and stocked in the cell by its mother. These are solitary wasps, so each female excavates her own burrow.” The genus information page on BugGuide has more comprehensive information.

Hello Daniel,
Hopefully you don’t mind the numerous submissions, but I work where I can go out to the goldenrod field
every hour or so, so I always bring camera(s) with me.  My next home has large milkweed fields, so maybe
next year I’ll have some different varieties.  Thanks for the identification; I never had seen one before.
It’s neat that the name roughly translates as a sand-loving wasp… (from B.G. info)
One thing I noticed is that B.G. lists them from 11-25mm (0.4”-0.98”) but I am certain this one was closer to 2.75”-3” long.
Thanks again,
James

Update:  August 27, 2016
While going through our archives today to tag postings with Goldenrod Meadow, we discovered that we never identified this Thread Waisted Wasp, which we now believe to be in the genus Ammophila based on this BugGuide image.  According to BugGuide, they are “Medium-sized black wasps with a relatively long petiole (“thread-waisted”), and usually with orange on the abdomen. ”