What's That Decapitated Head??? MIght it be a Cicada??? Cleaner Shrimp

Atlas Moth found in Canada
Location:  Strait of Georgia, British Colombia Canada
August 13, 2010 1:39 am
The attached photos are of an Atlas Moth that landed on the bow of the Celebrity Mercury cruise ship on 8/7/2010. Thanks to your website I was able to identify it. Even though these guys are native to SE Asia this one managed to get blown to Canada, Strait of Georgia, B.C. Sorry about the poor quality of the photos. The moth landed in a crew only area of the ships bow and I had to use 380m telephoto and the blow it up some more.
Jim 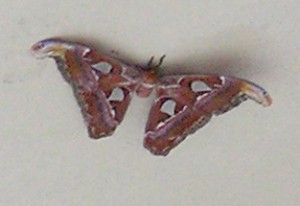 Hi Jim,
Despite the poor quality of your image, this does appear to be an Atlas Moth, and as you indicated, it is a Southeast Asian species, so it is considerably off course.  We would discount your theory that it flew or was blown to Canada.  We can think of two very plausible explanations.  Since cruise ships travel around the world, it is not inconceivable that the caterpillar found its way on board and formed a cocoon, emerging thousands of miles from its native habitat.  Atlas Moths are also raised in captivity, and people can purchase cocoons.  Perhaps one of the passengers wanted to create a sensation and released the moth onboard. 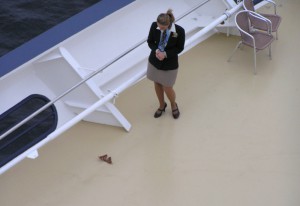