Tiger Swallowtail Gynandromorph
Location:  Hillsborough, NC
August 6, 2010 10:48 am
Hi guys,
I work at the Butterfly House at the NC Museum of Life & Science, Durham, NC. Your site is invaluable to us! A friend of ours, who lives locally, sent us this photo of a Tiger Swallowtail gynandromorph, taken last week. I’ve been hoping to see one for decades! If you look closely you can see small patches of wing from male tissue on the female (left) side. What we’d like to know is, does anyone have an idea of the frequency of such an occurrence, especially a near-perfect bilateral one like this?
Richard Stickney 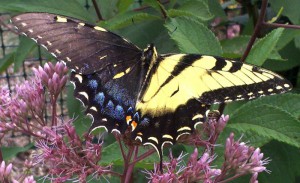 Hi Richard,
Your letter and photograph have us very excited.  On a recent behind the scenes tour our staff was given at the Natural History Museum of Los Angeles, the entomologist, Dr. Brian Brown was very proud of two specimens of butterfly gynandromorphs he showed us, but neither was as spectacular as this Tiger Swallowtail.  Its coloration is even more dramatic since the female left half is also the less common dark morph.  We will contact Dr. Brown to see if he can provide any information on the frequency of occurrence of gynandromorphs in general, and in particular, such dramatic examples.  We are going to have to bump something from our feature section to include this marvelous documentation.  Mom who is visiting from Ohio identified the food plant as Joe Pye Weed, a common roadside wild flower. 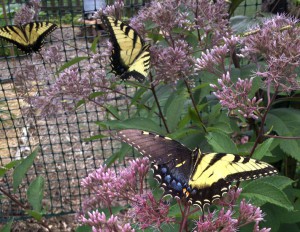 Update:  Julian Donahue suggests some resources
August 9, 2010
That is indeed a dramatic bilateral gynandromorph.
I don’t know of a single paper that answers your question about the frequency of this, but you might want to ask someone who works in butterfly genetics.
Try sending the photo and question to some of the following, all of whom work in this field (all are Ph.D.s):
Andy Brower
Thomas C. Emmel [head of the McGuire Center in Gainesville, which probably has a large collection of gynandromorphs)]
Paul Opler
Austin “Bob” Platt
Mark Scriber [“expert” on P. glaucus]
Good luck,
Julian P. Donahue

Ed. Note: What follows is the email we sent to the experts.
Dear Venerable Experts,
I was given your names and contact information by my friend and neighbor Julian Donahue.  My name is Daniel and I am a rank amateur who has been running the pop culture website What’s That Bug? on the internet for ten years.  This amazing photograph of a bilateral gynandromorph Tiger Swallowtail was recently sent to the website from North Carolina.  Can anyone provide any information on the degree of frequency of butterfly gynandromorphs and any information on their fecundity?  Thanks for your assistance.
Daniel Marlos

Paul Opler responds
Dear Daniel,
This is not only a bilateral gynandromorph, but is also showing some mosaic traits.
Beautiful image!
Paul Opler

Professor Andrew Brower responds
Hi Daniel,
You asked about fecundity of these:  I think zero – the genitalia are half male, half female, and I think they cannot engage in copulation.
I don’t know offhand the frequency with which bilateral gynandromorphs occur, but I know by their desirability that they must be rare – perhaps one in 10,000 (a random guess).
Andy Brower
Professor Andrew Brower
Department of Biology
Middle Tennessee State University
Murfreesboro, TN  37132   USA

Mark Scriber responds
Hi everyone;
This is a beautifual specimen. It is obviously nearly a bilateral gynandromorph, but with yellow mosaic color (probably male-like). We sometimes see yellow/dark mosaics (usually in the dark morph female wing background) in offspring our reared tiger swallowtials. I would estimate that these have occurred roughly at rates of 1  in 4,000-5000 offspring. The bilateral gynandromorph tigers are rarer, and might be found roughly once in 20, 000.  We have reviewed the role of hybridization in this phenomenon and some of the historical records in a recent paper:
Scriber, J. M.,  R.J. Mercader, H. Romack and M. Deering. 2009 Not all bilateral gynandromorphs are interspecific
hybrids: new Papilio specimens from field populations. J. Lepid. Soc. (color illustrated) 63 (1): 37-47
Best regards,
Mark Scriber

Brian Brown Responds
September 17, 2010
Daniel,
Sorry I took so long to respond. Gynandromorphs are indeed rare, but
insect populations are so large that they are almost inevitable. In some
insect they are even common. I imagine they don’t do very well in the
environment however, as their lack of symmetry in size would make them
clumsy. If you Google “gynandromorph frequency” you’ll see that there
are many studies on this subject.
Brian V. Brown
Curator, Entomology Section
Natural History Museum of Los Angeles County