Black and Yellow Striped Beetle
Location:  Southern Utah
July 31, 2010 5:52 pm
I live in Hurricane, Utah, and we went down to the Kolob Reservoir earlier today to fish, and I caught this bug. It looks to me like a Yellow and Black Striped Beetle of some sort. I thought it was a bee at first because of the markings, but it doesn’t have a stinger. It also spreads its wings, but doesn’t seem to fly.
Beau 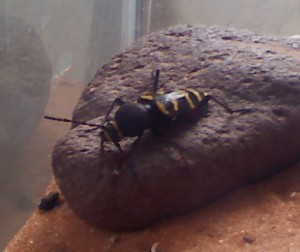 Hi Beau,
The angle of view of your photograph is not ideal for identification purposes as it doesn’t fully illustrate the banding pattern on the wings of your beetle which is classified as a Longhorned Borer Beetle in the family Cerambycidae.  We are relatively certain it is in the tribe Clytini, but there are several genera and species with very similar markings.  Based on your location, we favor this being a Banded Ash Borer, Neoclytus caprea, which is profiled on BugGuide.  The coloration and pattern is quite similar to several wasps, and it is believe to be a wasp mimic with protective coloration.