Male Spotted Wing Drosophila Fly (Boo Hiss!)
Location:  Edmonds, Washington
July 24, 2010 10:37 pm
Hello again, Daniel, here is a picture of a male Spotted Wing Drosophila (only the males have the spots on the end of the wings), as mentioned in an earlier e-mail. It met its demise in one of my vinegar traps by my blueberries. I included the tip of a standard double-pointed wooden toothpick for scale. One pic of it’s belly, the other from the back. You can put the pics/me in your Unnecessary Carnage section if you choose, but this uninvited recent alien arrival on the West Coast is a serious problem (anything that cuts my raspberry harvest in half, is a serious problem–and that’s what they did!). I think I read that they came in from Japan via California. Doing an on-line search brings up more info, particularly good are the sites by the University Extensions in Oregon and Washington. And by the way, in answer to ”Herding Grasshoppers” Mama’s question about 10-lined June Beetles being native to the NW — yes. One of my earliest ”bug memories” is of one of these impressive creatures droning through the air to land with a loud thud on our screen door, on Vashon Island in Puget Sound. That was quite some time ago, ahem…. Being a Nature Geek from a tender age, I was both terrified and fascinated. Anyway, she can let it go, they aren’t in the same league with SWD (Spotted Wing Drosophila). Hope all is going well with the chickens.
Cheers, Beachdee 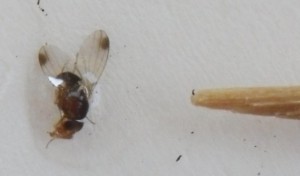 Dear Beachdee,
Thanks for sending these important images of a new Invasive Exotic threat to agricultural crops to our site.  We would never consider the control of Invasive Exotic species to be Unnecessary Carnage.  BugGuide identifies this species as the Cherry Vinegar Fly, Drosophila suzukii, and indicates:  “It is an introduced species from Japan and Far East.
It feeds on healthy fruit, not just rotting fruit as other drosophilids, so it can be a serious agricultural pest.“ The hosts include:  “Many commercial fruits, cherries, raspberries, blackberries, blueberries, strawberries, etc.“ 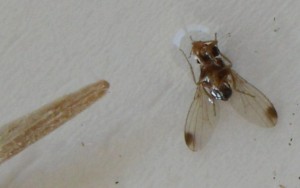 We are amused that there is so much interest in our chickens.  The sun has been up for hours, and we really need to abandon the computer and let the chickens roam for a bit.  We worry about the hawks which are quite common in the area, so we do not leave the youngsters out unsupervised.

Thanks for the kind words and good info, Daniel.  I’ll try for (think I can) a follow-on pic of one of the maggots in a raspberry (to add to your collection and so people know what to look for), but probably can’t until the end of the week because of our schedule.
By the way, good idea to watch the hawks.  Also a word of caution (we had quite a few “pet” fowl when I was a youngster), don’t know if this is a concern in your area, but we ended up having to use the small-bore chicken wire and electrified fence for the night-lockup coop for our ducks, geese, chicken, and peacocks — besides a problem with racoon predation, weasels can get through a very small opening, and the larger-holed chicken wire means nothing to them.  After some losses, we went to electrifying the perimeter, using a double layer of offset small-bore chicken wire below the electrified line, and then could use the larger above it,  because we found one bird dead, not torn up and munched upon, but dead of loss of blood in a locked and intact cage.  We were told it was the work of a weasel or mink.  Turns out it had lain down too close to the front wire and the weasel had snuck up and grabbed it, pulled it to the wire, and they’ll often bite and lap the blood but not actually eat the meat.  Not to alarm but just to caution, as there are ways to make it difficult to impossible for such to happen, if one knows ahead of time.  We did have a weasel living in our patio rockery in town, it’s not just the countryside…and I know what a bummer it is to lose one of the flock.  If nobody in your area is having problems with predators, probably not to worry.  Hopefully you’ll never have problems.    Cheers, Beachdee

Thanks for the followup information.  Our Los Angeles predators include coyotes and raccoons as well as hawks and owls, and there are no longer any foxes in the vicinity.  Luckily we do not have weasels.  The coop has a heavy duty screen, and though the chicken run is made of chicken wire, we lock the hens away in the more secure coop at night.

Mediterranean Fruit Fly in Mt Washington: but is it eating the Olives???