Pretty Bug
Location:  Wake Forest, NC
July 24, 2010 9:52 am
From Wake Forest, NC, this bug is pretty! I love the colours, but I had no idea where to start identifying on this one.
erica stjohn 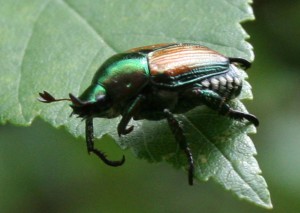 Hi Erica,
The Japanese Beetle, Popillia japonica, the species represented in your photograph, is currently prominently featured at the top of our homepage as the featured Bug of the Month for July 2010.  WE got tremendous amusement at your infatuation with its coloration and your comment that it is pretty.  It is an attractive beetle, but any points it might score in the beauty category would be quickly outweighed by its status as an invasive exotic species that swarms in the summer months and defoliates hundreds of different species of cultivated plants including roses, grapes, clematis, blueberries, peaches and almost any ornamental plant that is kept in home gardens.  Our mother refers to the leaf damage as “lace doilies” since the beetles leave nothing behind on the leaf but the veins.  We suspect that your letter might even generate some hate mail for gardeners who are plagued by the yearly appearance of swarming Japanese Beetles.  Native to Japan, the Japanese Beetle was first found in New Jersey in 1916, and it quickly spread through most of the eastern parts of North America.  Manufacturers even have products that are designed to attract and trap Japanese Beetles in an effort to keep them from feeding on cultivated plants.  The adult beetles are not the only problem.  The beetle grubs feed on the roots of plants and grasses, often causing brown lawns.