Our Favorite Letter of the day: Aerial Yellowjackets nest in mausoleum!!!

Bee Nest in Cemetery
July 13, 2010
Hi,
I was exploring a cemetery in Canal Fulton (Northeast Ohio) and got stung when looking into a mausoleum. 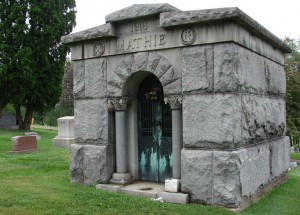 After recovering from the sting I returned to the site to see what stung me and why, I did not see this nest at first and I’m sure I was stung because I got too close. Can you tell me what type of bee/wasp these are?
Thanks
Dave
Canal Fulton, OH 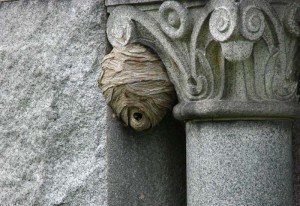 Hi Dave,
We don’t mean to make light of what we are certain was a painful sting, but we found your letter positively captivating, and we think your photos are exceptional.  These are Yellow Jackets, most probably Eastern Yellowjackets, Vespula maculifrons, which BugGuide indicates is:  “one of the most abundant yellowjackets in the U.S. east of the Plains states.”  BugGuide also states the Eastern Yellowjacket is found in “Meadows and edges of forested land, usually nesting in ground or at ground level in stumps and fallen logs.”  Perhaps the queen, who started building this nest before she had produced a brood of workers, mistook that ionic column for a stump. 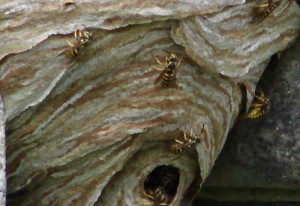 Update: July 15, 2010
We now believe this is probably the Common Aerial Yellowjacket, Dolichovespula arenaria, which is featured on BugGuide.

Eric Eaton Confirms ID
Hi, Daniel:
“Has” to be the “Aerial Yellowjacket,” Dolichovespula arenaria.  They are actually quite beneficial predators of flies, so if they can be left alone…..The nesting season for this species is also shorter than for others, so it should be abandoned sometime in late August or early September at the latest.
Eric

2 Responses to Our Favorite Letter of the day: Aerial Yellowjackets nest in mausoleum!!!