2 different swallowtail butterflies
July 12, 2010
Hi again Bugman!,
Congrats on the book!
This afternoon near Garnett, Kansas (that’s about an hour and a half South and a little West of Kansas City) I was out looking for interesting photo ops in a field of wildflowers, and saw what I thought was a Tiger Swallowtail butterfly. About 15 seconds looking through your butterfly pages, and I’m pretty sure what I’ve got here is a Zebra Swallowtail. It did not seem a bit put out by my presence, which surprised me because it’s wings were a little battered, you know the way they might look if a bird had gotten a taste?, even so, it was a beaut’ and it allowed me to make many attempts at a clear photo. While I was following it around another type of Swallowtail showed up, and I managed to get a reasonable pic of that one also, though it was not nearly as accommodating as the first one.
I can’t find one that matches it on WTB anywhere! I wondered if you could help me out with that? Both butterflies are striking. They are roughly identical in size. The mystery one is mostly black with vivid yellow spots on it’s wings in the shape of a V. Both of them have a small group of red and blue spots on the hind wings, so I gave some thought to the possibility of sexual dimorphism. Did I spell that right?, but now I’m leaning toward two different species.
The coolest thing to me though, is the several rows of yellow dots down the black one’s abdomen.
July/11/10, Temperature in the mid-80s F, though it felt more like upper 90s.
Thanks in advance!
Jeff in T-Town
Eastern Kansas, USA 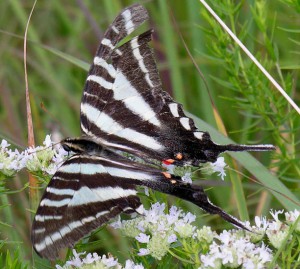 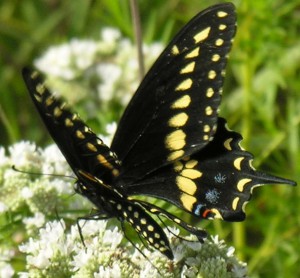