Datura-eating beetles
July 8, 2010
Saw dozens of these decimating a datura plant (leaves and flowers) in North San Diego County, CA. Never saw them before and wondered if they’re new in town. They are not more than 1/4 inch long.
J Cannon
Carlsbad, CA 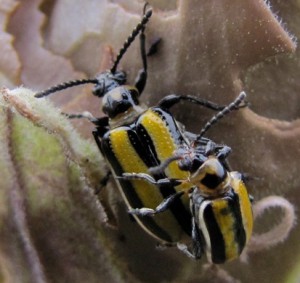 Dear J,
Our initial belief that these were mating Three Lined Potato Beetles, Lema daturaphila, caused us some doubt when we looked at the images posted to BugGuide.  The photos posted there were of individuals with red heads, pronota and legs, but a few photos had coloration like your pair.  One image posted to BugGuide has this information:  “lighter eastern beetles were called trilinea or trilineata while the darker California ones were called daturaphila. They have now all been lumped” into Lema daturaphila.  The species is also known as the Old Fashioned Potato Beetle, and though the coloration of eastern individuals and those from California is different, we are confident with our identification.