Identifying Giant “Beetle” in Tucson
July 6, 2010
Hello, this passed fourth of July, I was called in to carry children away from a giant scary bug. By the time I had gotten there, three children, all under the age of six were cautiously trying to get through the front door, which was guarded by an unknown watch-dog of a bug. For kicks, would you be so kind as to identify it, and let them know how much danger, (If real or not hah) they were in?
It was about a little bigger than a pill bottle from top to bottom.
The bug itself was very docile if at times it moved fast, it was only to retreat from them and possibly light sources.
I’ve searched high and low and have not been able to identify our friend here. Apologies for only being able to provide one picture, it was hectic at the moment.
Thank you in advance.
Sincerely, Alejandro Incognito
Tucson, Arizona Southwestern USA 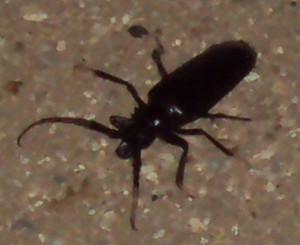 Dear Alejandro,
Your photograph shows the general outline of a Prionid Root Borer in the subfamily Prioninae, but there isn’t enough detail to conclusively identify the species.  There are many species that can be found in Arizona, as browsing through the possibilities at BugGuide will reveal.  Our best guess on this is the Palo Verde Root Borer, Derobrachus hoverei, as it most closely resembles the general structure and coloration discernible in your photograph.  All of the Prionids have strong mandibles because after they metamorphose into adults, they need to chew out of the roots and stumps where they have spent their larval years feeding on wood pulp.  According to BugGuide:  “Adults attracted to lights.”