Beetle on Oak Debris
June 20, 2010
Hi. I found a bunch of these guys skittering around on the stump and debris of an oak tree my parents had cut down in their yard. At first I thought they were some sort of crickets; they were moving rather quickly and it was hard to get a good look let alone a picture. But I finally succeeded. I’m not so practiced at IDs for beetles, but I think I am correct that they are one of the wood borer beetles: neoclytus scutellaris (no common name that I could find). I was unsurprised, though, when I read that they like dead and dying oaks; they’d found this one less than 24hrs after it had been cut down. I’m hoping to have some pictures soon from the cocoons I rescued from the cut down branches.
Karen H.
Belleview, FL 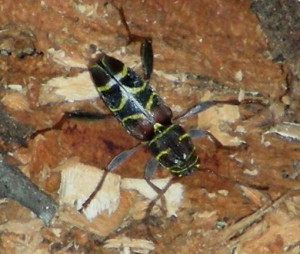 Hi Karen,
We agree with your identification of Neoclytus scutellaris, a Longhorned Borer Beetle whose larvae, according to BugGuide:  “feed in sapwood of (dead?) oaks, hickories, also grape.”