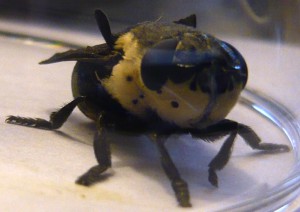 Hi Barb,
Your identification of a Bot Fly in the genus Cuterebra is correct.  We must congratulate you on the time and effort you put into trying to identify this unusual creature that has such an interesting life cycle.  We just utilized a similar catch and photograph (and hopefully release) technique with a Flesh Fly found in our own offices.  The best way to remove an insect from the home without handling it directly and without harming it is to use a glass to capture it, and then slipping a postcard under the glass.  The creature may then be photographed and released, or just released. 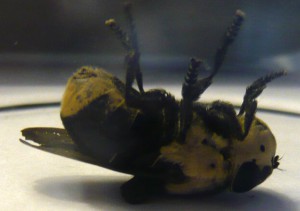 One Response to Bot Fly