Some sort of Dragonfly Species?
June 10, 2010
I was outside during mid afternoon doing some yard work, and out of the corner of my eye, this strange bug caught my attention. At first glance, it looked like a dragon fly, but it looked to odd to be one. It’s body appears to be much longer than a dragon fly. The body is also broken up into 5 segments and has what appears to be some type of stinger at the end of it’s body. It also kept arching it’s body up and down and you can see what I mean in the pictures. It was all black and had no distinctive markings or other colors. I also held it to get another good picture and from the head to the end of it’s tail was about 3 inches.
Buggy For Bugs
Detroit Michigan 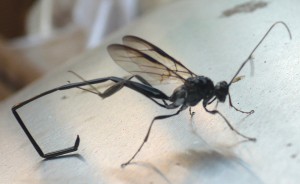 Dear Buggy,
This is an American Pelecinid, the only member of its family in the continental U.S.  The American Pelecinid is a parasitoid wasp that preys upon the grubs of June Beetles that live underground.  Your specimen is a female and the female American Pelecinid uses her long jointed abdomen to lay an egg underground on or near a burrowing white beetle grub.  When the egg hatches, the larval Pelecinid feeds upon the grub.  We are presetting your letter to post live to our site between June 15 and June 23 as we will be in Ohio visiting mom for a week, and we want our readership to continue to get live daily postings in our absence. 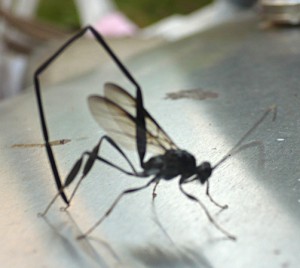 Thank you for the fast response! It was most certainly an interesting bug and never have I seen that before. I was also surprised to learn that the American Pelecinid is part of the wasp family.