Antlion Primping in the Mirror: Potential Calendar image for 2011

Clear wing wasp?
June 10, 2010
I was told by an Ag Agent that this is a clear wing wasp, but didn’t see any like it on your site.
This came in through a window one night in August, I had never seen anything like it so snapped a couple of pics. I livein middle TN on the Highland Rim. I thought it was a dragon fly until I saw the wing arrangement- they were not perpindicular to the body, rather in a “v” shape away from the body when extended, and ran the length of the body when folded.
The photo doesn’t do justice to the beautiful blue shimmer on the wing tips, they actually appear kind of pink in the photo.
Any idea what this was?
PS: Awesome site!
Teresa in Cookeville
Cookeville, TN 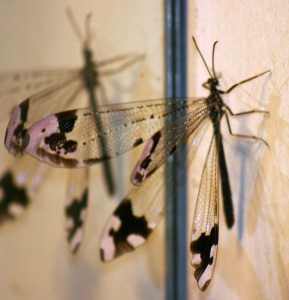 Antlion in the Mirror

Wow Theresa,
This narcissist is an Antlion, Glenurus gratus, and it appears to be admiring the distinctive markings on its wings. If we were half this good looking as this Antlion, we would primp in front of the mirror all day. Antlions are Neuropterans and they are related to Lacewings and Owlflies. This photo is absolutely gorgeous.  We took the liberty of correcting the color balance by eliminating the yellow glare of the incandescent lightbulbs.  That has enhanced the pink coloration on the wing tips.  We are going to run your photo as teaser for a possible 2011 wall calendar.  We are trying to ascertain the interest of our readership before we begin designing the calendar.  We hope you would consider allowing us to use this image if we decide to produce a calendar. 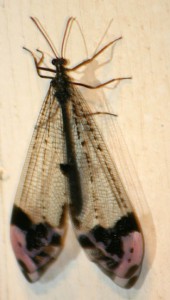 An Antlion!  At last, an answer!
He really did appear to be admiring himself in the mirror- I thought perhaps he had newly acquired his wings because he was flexing them down, then up as if to dry them, but now that you mention admiring himself I think he was.
You’ll be glad to know he was released unharmed.
Feel free to use the pic for your calendar- he was a beauty.

Thank you Theresa.  It is still too early for us to determine if there will be a 2011 Calendar since putting it together will be considerable additional work.  Keep checking back with our website for updates, especially closer to the end of the year.
Daniel