Unidentified sphinx moth
June 9, 2010
This beautiful animal just happened to enter through our window.
I am unable to identify it further than to say it is a sphinx moth.
Thanks!
Joaquim
Spain (north east) 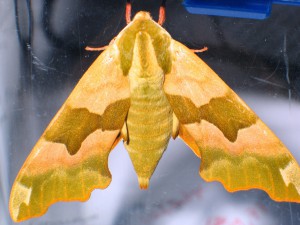 Hi Joaquim,
You encountered a Lime Hawkmoth, Mimas tiliae, a species that has an extensive profile on the Sphingidae of the Western Palaearctic website which states:  “On the Iberian Peninsula this species is recorded from northern Spain and northern Portugal, with a small population in the mountains of central Spain (Pérez De-Gregorio et al., 2001). However, Rambur (1942) records a single individual from Malaga, Spain, but it’s status in this area requires confirmation.”  We are planning ahead for a trip we will be taking next week to Ohio, and we are presetting your letter and photo to post during our absence between June 15 and June 23 so that our readership will continue to get daily updates to the website.