Strange bug found off shore of creek.
June 6, 2010
Hi, I found a strange bug today (6/6/10) while fishing and I was wondering if you could help me idetify it. I turned over a rock that was about ten to fifteen feet from a creek and I saw this thing curled up in a little hole in the mud. It was on land not in the water. It almost looked like it had hatched there and grew because there was no real entry or exit from its location. There was a pretty tight seal because of the flatness of the rock. Also it wasnt moving almost like it was hibernating there. I scooped it up in a cup and it kicked around a little but all in all not real movement. It has big legs in the front but a long body so Im not sure how it would move. It has some pretty serious pincers on its mouth. It bit pretty hard onto a stick. I have no idea what t his thing is and neither does anyone I show it too. Any info would help. Thanks
Matthew R. Boyer
Southeastern Pennsylvania 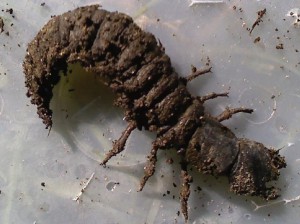 Hi Matthew,
Hellgrammite identification requests like yours have been pouring into our offices from around the country, as are images of the adult Dobsonflies the Hellgrammites will eventually metamorphose into.

Possibly an encounter with a Hellgrammite