May 24, 2010
I just noticed that Lefty and Digitalis have laid eggs on the leaf of the speckled sword plant, and there are still at least 30 fry in the aquarium with them.  I just captured 10 fry in an attempt to remove all remaining fry to the grow out aquarium.
In my second attempt, I caught 29 more small fry, and that appears like it may be all of them, though they are hiding quite well.  All the 39 fry that were captured had fat round bellies, and I watched them eating the spawn.  It must have been an enormous spawning since there are still quite a few eggs remaining.  When I looked at the aquarium this afternoon, things just seemed different.  The fry were not clamoring around the glass with the parents.  They were hanging out in the rear of the aquarium, near where the spawning had occurred.

May 27, 2010
Lefty and Digitalis’ eggs hatched sometime yesterday because they were gone from the leaf when I returned home at about 8:30 PM.  I noticed a small cluster of hatched fry wriggling on another leaf.  This is not a large hatching.  It will be interesting to see if they are raised by the parents, or abandoned for a larger brood.

May 30, 2010
There are about 30 fry wriggling on the leaf of the sword plant where they were moved shortly after hatching.  The parents do not seem interested in moving the fry again.  The photo taken today is hopelessly blurry. 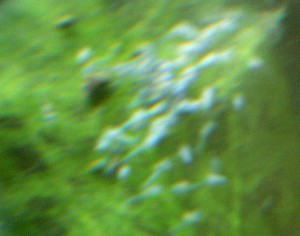 May 31, 2010
About 50 fry became free swimming today, and they had their first meal of newly hatched brine shrimp.  The parents are protective, and the fry are quickly herded back together if any individuals stray from the school. 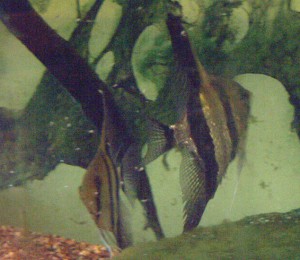 Digitalis (left) and Lefty with Fry

By the time I decided to take some photos, the light in the aquarium was very low since this birthing aquarium does not have a light fixture.  The only light is daylight coming from windows on the west side and from the north porch with the awning.  The back of the aquarium has much algae. 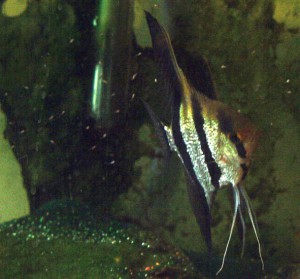 Lefty, Digitalis and the new Brood