what’s eating my greens?
May 22, 2010
It’s a long and slender beetle with a red head, sleek black body with white stripes. A pretty bug, really. Striking and bold. But should I kill them? I assume they’re eating my garden, along with those damned flea beetles. What to do?
Green Gardener
NW Washington DC 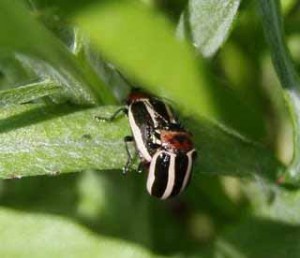 Dear Green Gardener,
These are Leaf Beetles in the family Chrysomelidae, and they appear to be mating, not eating.  We believe we have correctly identified your beetles as Calligrapha californica based on images on BugGuide.  BugGuide indicates “Larva feed on beggarticks (Bidens sp.) and possibly other plants” and that “The British Columbia Cranberry Growers Association considers Calligrapha californica beneficial, as it feeds on weeds in their cranberry bogs.“