Skipper, but what species?

Is this a cloudywing skipper?
May 18, 2010
I took the picture of this fellow in the middle of the day on May 2 while taking a walk in Silver Springs State Park (FL). I’m pretty sure it’s a skipper of some sort, but I haven’t been able to identify which one. The nearest image I’ve been able to find is a cloudywing (genus Thorybes) though I saw a Cogia (no common name) also seemed close. Can you tell me what it is?
Karen H.
Belleview, FL 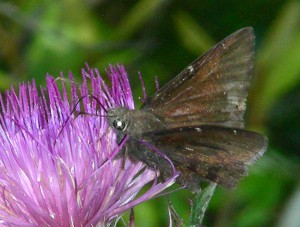 Dear Karen,
Trying to differentiate the Skippers in the family Hesperiidae from one another is no small feat, because according to BugGuide, they are: “Generally small, mostly orange or brown butterflies with short fat bodies, hooked antennae and rapid, skipping flight.  Some species (chiefly Spreadwing Skippers, subfamily Pyrginae) hold their wings in a single flat plane, many others hold hind wings flat and forewings at an angle.”  We haven’t the necessary skills to properly identify the specimen in this photo, and indeed, examination of the actual specimen may be necessary because sometimes a photograph just isn’t sufficient for proper identification.  There is a photograph posted to BugGuide of a Northern Cloudywing, Thorybes pylades, a species that despite its name ranges into Florida, and that image seems to match your individual quite closely.  The genus Cogia, according to BugGuide, ranges in the western states, so we would eliminate that possibility.

3 Responses to Skipper, but what species?