Backswimmer, NOT Water Boatman are Edible

Insect found swimming in the pool
May 17, 2010
I’ve never seen a bug like this before and was curious if you knew what it was.
I found it swimming in my pool (I just shocked the pool yesterday, so it might have some chlorine resistance…). It was swimming underwater and was moving pretty well, using its larger legs to swim while the smaller ones were pressed against its body (it almost looked like a tiny frog at first, by the way that it moved, except that the legs were hinging near the center of its body instead of the back).
When I fished it out of the water, it didn’t seem overly mobile on land, although it was able to slowly scoot itself about. Its body was about 2 cm long.
A first time bug hunter, Jason
Folsom, CA (foothills near Sacramento) 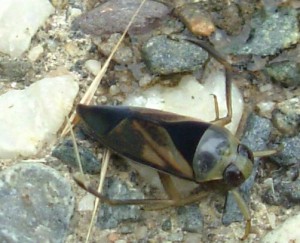 Hi Jason,
This is a Water Boatman in the family Corixidae, but we are uncertain of the species.  BugGuide has numerous genera but many look alike to us.  Clumsy on land, Water Boatmen are excellent swimmers and fliers.

Correction:  Backswimmer
Boatman Pic actually Notonecta?
September 28, 2010
Hello, Friends of the Bugs,
While trying to ID a bug that had landed on our deck here in Edmonds,WA, I discovered that you have the same picture on your site under two different headings/labels.  It comes up under “Water Boatman are Edible” when “Boatman” is typed into the search box.  Your answer to that post was to say it was Corixidae.  The picture matches “my” bug exactly, and I had also come to the tentative conclusion after initially looking in Bug Guide, of Corixidae, but wasn’t convinced.  However, on BugGuide I happened to see another pic that also matched, was mislabeled as Corixidae, and someone had posted that it was Notonecta.  Looking further online, I agree 100%.
If I type Notonecta or Backswimmer into your search box, it comes up with a post titled “Backswimmer” which appears to be the exact picture, this time correctly IDd as Notonecta.  I thought you’d like to know so a note can be added (or however you want to deal with it, if at all) to the Boatman one, correcting the ID.  It might be confusing to some, such as myself, who might not accidently happen upon the correct ID and be thinking it is a Boatman.  I think many folks, like myself, might initially do a search for Boatman upon finding one of these bugs, since I was not familiar with the existence of Backswimmers.  But now I know, and I would have really wondered how a waterbug got on my 2nd story deck, except you explained they can fly well.  The 7/22/10 pic of a Backswimmer swimming (on its back, of course) highlighting the abdominal hairs is especially nice.
I did not bother to submit all the pics I took because I found the ID, as you already have several pictures, including one from 2005. I only attached one for reference.  Later, the Backswimmer had flown away.  Thanks again for such a great site.
Cheers, Dee Warnock

Hi Dee,
Thanks for bringing this to our attention.  We did not realize that Baffled in Santa Cruz submitted the exact same image as Jason.

Toe-Biters and other Insect Fast Food in Thailand

2 Responses to Backswimmer, NOT Water Boatman are Edible